Sermon Series: This I Believe

Exploring the Apostles Creed
-
Part 6: ‘He descended into hell; the third day he rose again ...’

When the New Testament writers want to explain the death and resurrection of Jesus, very often they give us a visual picture of Christ going down, in order to go up again. It's one of the most characteristic patterns in the New Testament: Christ descending and then ascending. We see it in Philippians 2 when Paul talks about Christ who is equal with God emptying Himself of all that and descending; He comes down and makes contact with us in our world. Then He goes as low as you can go, dying, even dying a shameful death. Then God exalts Him and He goes up again. You could think of the gospel of John as another example of this descending in order to ascend. The whole gospel of John follows that sort of visual pattern, that Christ starts out up, goes down, and then ascends again. Well the Apostle’s Creed follows that New Testament pattern when it speaks of Christ, Who is eternally with God; Jesus Christ, God's only Son, our Lord. In today's line from the Apostles Creed, we confess that Jesus descended into hell and on the third day was raised again and ascended into heaven.
-
In the ancient Church there was a tradition of religious art called iconography. This was an ancient tradition of trying to convey visually the message of the gospel; trying to express the truth of Scripture in a visual form. So that just by looking at the picture, you could contemplate the message of Scripture and the icon of Christ's resurrection.
-
This is the way the resurrection is depicted in this tradition of art. If you've ever seen a western painting of the resurrection, usually you see Christ hovering in the air about four feet above the ground, the grave is empty behind Him and the soldiers are sleeping on the ground in front of Him. The resurrection in western art is portrayed as a miracle that happens to Christ and He's all alone up there in the air. So we are just meant to marvel and say, ‘Wow, look at that! 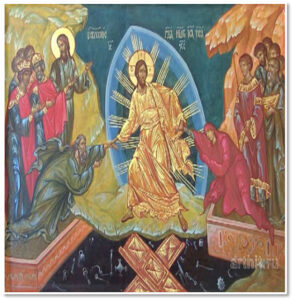 In the Eastern Church however, the resurrection is portrayed quite differently. Here you see Christ standing over two broken doors, and all around in the darkness, you can see broken chains, broken locks and keys. That's a representation of hell, the place of the dead, portrayed as a place down under the ground where the dead go. Christ has just gone down there and He has broken the chains. He has smashed the locks and then He has unhinged the doors of hell. As He rises from death, He stands over the doors, over those broken gates of hell, but He's not alone. This is not like a western painting where He's just in the air and we're meant to worship and adore Him. Do you see the characters on either side? There’s an old man and an old woman. These represent Adam and Eve.
-
So here we have Adam and Eve, the head of the whole human family, the representatives of the whole human race. Do you notice how Christ is grabbing them? He hasn't reached out His hand and said “Come take my hand and I will save you.”Isn't that from the Terminator? When Arnie says, “Come with me if you want to live.” No, it's not like that. See how Christ has grabbed their limp wrists? They are actually powerless to help themselves. They are in the place of the dead and Christ seizes them by their lifeless arms and raises them up with Him. Now gathered around on the side you can see the whole company of humanity. You can see figures from the Old Testament and from the New Testament all gathered around. There is a crowd of living witnesses as Christ tramples down the gates of hell and rises into the glory of God.
-
The person with the halo on the left is John the Baptist, bearing witness to Jesus. The forerunner, as they call him in the Orthodox Church. The crucial difference between this painting and those western paintings is that Christ's resurrection here is not just something that happens to Him. It's not just an isolated miracle that we're meant to marvel at and say, “Isn't that wonderful, He died and then came to life again.”It's not just a marvel for us to look at. Christ's resurrection is something that we participate in; it happens to Adam and Eve; it happens to the whole human family. Christ goes down into the place of the dead; He takes hold of the captives and as He rises, they rise with Him. As He ascends into God's presence, He takes the dead with Him, not holding them by their hands, but grasping their limp, helpless wrists and raising them up from the place of death.
-
Hell in this icon is that black, empty place at the bottom. There's nobody there; the gates are broken; the hinges have come off and the captives are ascending with Christ. The New Testament speaks about hell or the place of the dead, very much like this picture actually - as a place under the ground where the dead have gone. In a number of places the New Testament describes exactly what the icon here displays. It’s showing us that Jesus descends down to where the dead are and then ascends up again. Let me read you some of these Scriptures beginning with Ephesians 4, reading from vers

“But to each one of us grace has been given as Christ apportioned it. This is why it says: ‘When he ascended on high, he took many captives and gave gifts to his people.’ What does “he ascended” mean except that he also descended to the lower, earthly regions? He who descended is the very one who ascended higher than all the heavens, in order to fill the whole universe.” (Ephesians 4:7-10)

Do you see the pattern here? He goes down into the bowels of the earth and then He ascends to the highest place. The first letter of Peter, chapter three, speaks of Christ’s resurrection. This is a rather mysterious passage, but here's what it says. Reading from verse 18:

(For Christ) was put to death in the flesh, but made alive in the spirit, in which also he went and made a proclamation to the spirits in prison, who in former times did not obey when God waited patiently in the days of Noah . . .” Then it speaks in verse 21 of the resurrection of Jesus Christ. . .  “... who has gone into heaven and is at God’s right hand - with angels, authorities and powers in submission to him.”  ( 1 Peter 3:18-22 )

We see the same pattern here. He went down into hell, proclaimed peace to the captives and then ascended up to the highest place, through His resurrection, and all things are subject to Him. And we have the same picture in Philippians 2. From verse 9 it says:

“Therefore God exalted him to the highest place and gave him the name that is above every name, that at the name of Jesus every knee should bow, in heaven and on earth and under the earth ... “  ( Philippians 2:9-10 )

There it is again, this place of emptiness where the dead have gone, has become a place where Christ's name is confessed. According to 1 Peter, that place of the dead, the prison where those who die languish, has become a place where Christ's word is proclaimed. In Ephesians, the place of the dead has become one of the locations of Christ's presence. We think of death as emptiness, as separation from God, as being torn apart from the source of life. But the message of the New Testament is that death is not total separation from God. Death is a place where God has made contact. God made contact with us by coming in the flesh. But then God went right to the source of our problem, God descended to the deepest part of our human plight; God made contact with death itself, and filled death with Christ's presence. Those ears of the dead that can no longer hear, heard the joyful news of Jesus Christ. Those prisoners who couldn't raise a finger to help themselves were grasped and held by Christ Himself as He rose. So He descended to the dead, He descended into hell.
-
In the early Church, this message of Christ’s descent and resurrection, produced a really strange attitude towards death. If you were an outsider, if you were a good, respectable, pagan, Roman citizen, one of the things that was most offensive to you about these Christians was their horrible affection towards the dead. Did you know that when Christians wanted to have a prayer meeting, one of their favourite places to go and pray was not a Church building, but down into a tomb, standing among the bones of the dead. There you would pray and feel especially close to God - when you were surrounded by the bodies of the dead. Sometimes in a special celebration, you could have a Church service down under the ground in the catacombs, where the dead were laying.

Sign up and you'll receive the new sermon each Sunday

We promise not to send you anything else.

You have Successfully Subscribed!

Enter your email to receive our new sermon each Sunday.

We promise not to send you anything else.

You have Successfully Subscribed!